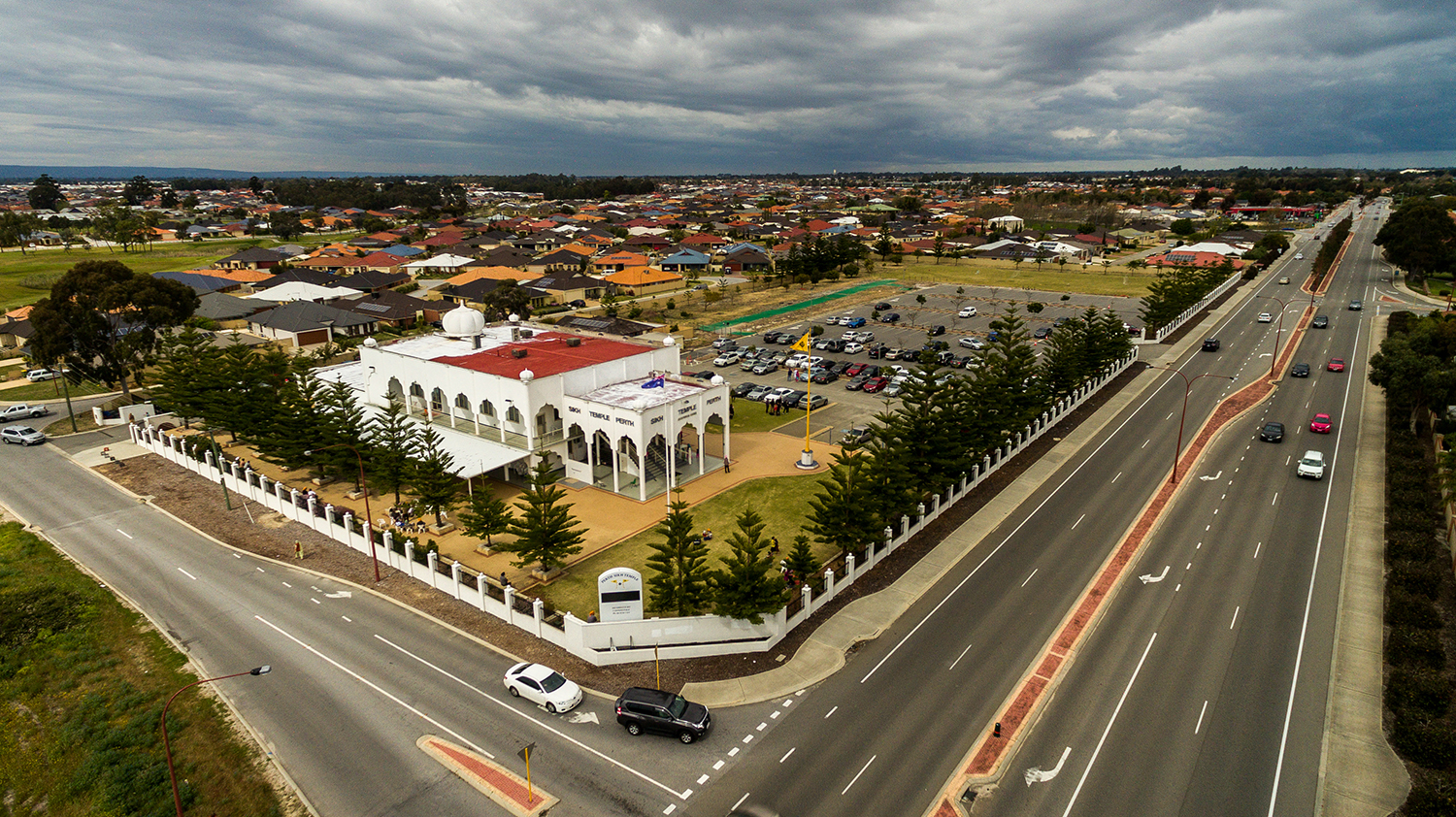 Back in the 70's there were no more than a dozen Sikhs in Perth and they realized a need for an organization that would co-ordinate and cater for these needs and for the students who were studying in Perth universities.

Since its incorporation, SAWA has had a dream to find a permanent home and in 1985 this dream came true when SAWA purchased a small church in Kensington. At that time there were less than 50 families and the place was ideal for the size of the Sikh community.

Before long we found ourselves being squeezed for space. It did not take us long to realize that we needed move to a bigger and better facility

In 1996, the SAWA Executive Committee proposed setting up a separate committee to be named as the Land and Building Committee. The aim of this committee was to acquire and develop facilities for a broader Sikh base in Perth .

In 1997, the Land and Building Committee purchased 5 acres of property at Canning Vale and had it successfully zoned for a 'place of worship' and community use.

The total cost of this project to date is close to $1.7 million. Most of this was raised through donations from Sikh communityies in Western Australia , Interstate and overseas.

The new Gurudwara caters for the needs of over 500 families of Sikh community.

SAWA has appointed Giani Jasvinder Singh Ji to look after the premises of the Gurudwara in Canning Vale.

Sikhs first arrived in Australia at least 180 years ago.

A significant number of cameleers (also known as the afghans") that helped open up central Australia were Sikhs.

Most hawkers and peddlers during Australia's formative years were the much loved and adored travelling Sikhs.

The Sikhs were very active with the wrestling circuit all over Australia in the early part of the 20th century.

There are quite possibly hundreds of sikh cremation sites across rural Australia. As cremation was not allowed in most Australian states at that time, the continuing cremation by Sikhs brought about a change in the law in most states across Australia which benefited many other communities as well.

Sikhs and Australians fought together on the same side in Gallipoli with at least 16 Sikhs enlisting and serving in the Australian Imperial Force for World War 1.

Sikh is the world's 5th largest religion, after Christianity, Islam, Hinduism, and Buddhism.

Is a distinct and unique religion on its own, not a sect of Hinduism or Islam

Existance of one God

90 % of the people wearing TURBANS in Australia are Sikhs.

Note-worthy Personalities & Items from this Era

The earliest recorded evidence of a Sikh being in W.A. was Pal Singh who arrived in Perth in 1886. He was a camel owner and settled in Wyndham.

In was normal for cameleers who came here to live close to one another. As they were known as Afghans, these areas became known as Ghantowns. In W.A. there was an established Ghantown in Coolgardie. Around Perth there was no single area but many stayed in East Perth, North Perth and around Fremantle.

Arrived from the Punjab in 1900. He was a professional wrestler and athlete. He too died in Perth.

He was a trader who travelled in the Great Southern. He had a store in Cranbrook and died in 1941.

He was a hawker who traded in a horse-drawn wagon in the Albany-Bunbury region with his brother, Nahel Singh. He was well respected and known as ‘Gentleman Singh’. His wagon was drawn by two horses, one of which tended go berserk at times. On one such occasion, Herman was driving the wagon near Wilgarrup River when the horse went berserk and bolted. His wagon over-turned and killed him. His brother, Nahel, cremated him at Deeside and the spot is marked by a post and rail grave.

Herman’s brother who returned to India, taking Herman’s ashes. He returned to W.A. 20 years later and rebuilt the grave as it stands now. After his retirement he lived in a two-room cottage in Cranbrook.

Also known as Charlie Smith, he was a hawker in Leederville in 1899. He left W.A. in 1923 and Buttan Singh reported his death in India.

Most Sikhs would travel around W.A. hawking their wares and would then return to India to retire. Some, however, were not able to do so and in 1932, the Sikhs were allocated a piece of land on the banks of the Canning River to be used as a cremation ground after a sickly Sikh immolated himself as he feared that he would be buried. The application for this land was made by Massa Singh and Buttan Singh. This area is now the heritage site.